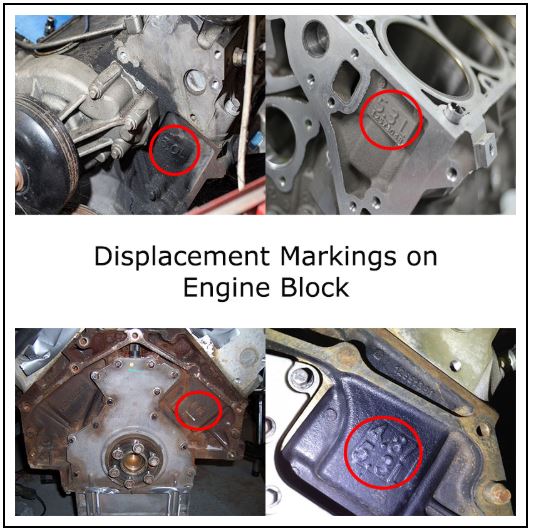 In this week’s article, I’m going to show you how to tell the difference between a Gen 3 and a Gen 4 LS engine. As usual, I’m going to be focusing mainly on the 4.8, 5.3 and 6.0L LS-based Vortec truck engines since they are the most common ones you’ll find when you’re hunting through a junkyard. If you do find a car LS engine, it’s probably going to be expensive.

I’ll be doing a more detailed article next week about the evolution of the Vortec truck engines but figured it would be worth doing a quick one on how to tell a Gen 3 from a Gen 4. The next one will cover more information about specific models.

If the engine is still in the vehicle, the easiest way to identify the engine is using the 8th digit of the VIN. Here’s a photo of the VIN sticker found on the driver’s door of my 2000 Chevy Silverado 1500.

If you don’t have the VIN, if, for example, you find an engine sitting on a pallet at the junkyard, here some ways you can visually tell a Gen 3 from a Gen 4 engine.

Another way to tell is by looking at the timing cover on the front of the engine. This information comes from Summit Racing, and they have a handy tool for identifying these engines, here’s a link to their tool. The following images were taken from this link.

If the timing cover is plain with no black pickups on the front of it, the engine is a Gen 3. See attached photo. If it has at least one pickup on the timing cover, it’s a Gen 4 engine.

Next, you can look at the intake manifold. If the manifold is low, smooth, and rounded, it is a car engine, so if it’s a Gen 3, it will be an LS1 or LS6 engine. If the manifold is taller and boxier, has ribs on the top, or still has the “Vortec” plastic cover on it, it’s a truck engine. See the photo below.

The next thing to check is whether the block is iron or aluminum. An easy way to check this is with a magnet. A magnet will stick to an iron block but won’t stick to an aluminum block. You should also note the displacement markings cast onto the block. These will be found on the front of the engine, underneath the driver’s side cylinder head, to the right of the water pump, as shown in the attached pictures.

If it’s a Gen 3 engine, with an iron block, and a truck intake manifold, with a 4.8/5.3 stamped on the block, it’s either a 4.8L LR4 engine or a 5.3L LM7 or L59 engine. There’s no easy way to tell visually from the outside of the engine whether it’s a 4.8 or 5.3L. If you have a borescope or pull a cylinder head, the 4.8 usually has flat-topped pistons and the 5.3 usually has dished pistons but there’s no way to see that from the outside.

If it’s a Gen 4, there are a lot more options as to what model it could be, some of them have AFM/DOD, some have variable valve timing, etc but we’ll cover that more in the next article, but for now, this one should help you be able to identify whether you’re looking at a Gen 3 or a Gen 4 LS truck engine.

Next time, we’ll go into more detail about the evolution of the LS-based Vortec truck engines. We’ll cover the following topics:

That’s all for this week, see you next time.